(ADELAIDE, AUSTRALIA). Pressure is mounting on Australian authorities to open criminal proceedings against the family of Sarawak Governor and former Chief Minister Abdul Taib Mahmud over the alleged laundering of AUS$ 30 million in South Australia.

A new report released today by the Bruno Manser Fund (BMF) is showing that the Malaysian politician’s four children and his late wife Laila invested $30 million of unexplained wealth in the Adelaide Hilton Hotel.

The Taibs took over the hotel from the sons of Sarawak tycoon Ting Phek Khiing in January 1994. The takeover coincided in time with the award of a multi-billion-dollar construction contract for the Bakun dam to Ting by the Malaysian government.

Another AUS $ 20 million were sent to Adelaide via loans from Golborne and Fordland, two Australian Taib family companies which were linked to a secret offshore structure on the Isle of Man.

Australian Sitehost director Gary Doherty said to the Sydney Morning Herald on Tuesday „he did not know the source of the funds behind Golborne or Fordland“ but claimed that „he had no involvement in money laundering“.

The Motion calls on the government to freeze Taib family assets based on South Australia’s unexplained wealth legislation. It also says the matter should be referred to appropriate Federal Government and law enforcement agencies. 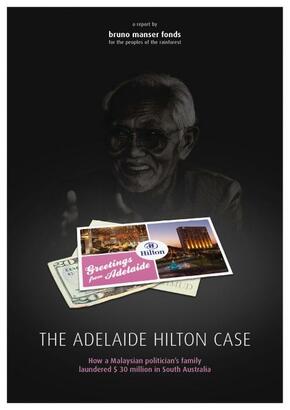