For the first time in the history of Sarawak, which has been part of Malaysia since 1963, a Chief Minister has taken on the timber industry. The timber industry has for long been the state's economic backbone but is currently facing decreasing yields due to non-sustainable harvesting practices in past years.

Acoording to Malaysian media reports, Chief Minister Adenan Satem gathered the tycoons of the state's big six logging firms, KTS, Rimbunan Hijau, Samling, Shin Yang, Ta Ann and WTK for a meeting in which he publicly accused them of using "corrupt" practices and warned them not to "mess with me."

Adenan also said that he will "put the fear of God into people who are dishonest" and described the state of corruption in Sarawak as "very bad, a reflection of what enforcement officers have not been doing."

"Some, of course not all, pretend they don't know. The reason is very simple; either they are stupid, cowards or corrupt."

Adenan carefully avoided to mention his predecessor and current governor, Taib Mahmud, under whose 33-year tenure as Chief Minister corruption has become endemic in Sarawak. Taib had abused his public office to enrich his family members who became billionaires during his time in office.

"Today is a day of celebration for Sarawak and Malaysia", Lukas Straumann, the executive director of the Bruno Manser Fund said in a first reaction. "These are the clearest words ever we have heard from a leading Malaysian government minister to combat corruption as a root cause of deforestation and under-development."

"We commend Chief Minister Adenan Satem for his courageous stance and important leadership in this question", Straumann said in Berkeley (US), where he is currently on tour to promote his book Money Logging: On the Trail of the Asian Timber Mafia.

"The international community and civil society are ready to assist Sarawak in the badly-needed reforms not only of the forestry practices but also its governance and institutions in a wider sense."

As the first minister ever in Sarawak, Adenan Satem signed an integrity pledge in which he committed not to award public contracts to his family members. 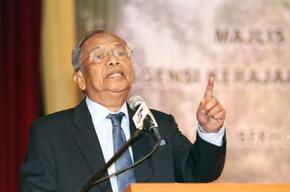