BLACKADORE CAYE, BELIZE. Hollywood actor Leonardo DiCaprio is bowing to pressure from conservationists and local fishermen over a planned luxury resort on a Caribbean island in Belize. Today, the Blackadore Development Group, a joint venture by Di Caprio and former Wall Street banker Paul Scialla, announced it would remove controversial overwater structures that had previously formed a key part of the project.

“Despite approval for overwater structures, we have listened the concerns of local stakeholders and there will be no overwater structures for rent or sale in the final development“, said Scialla today, following a fierce controversy on DiCaprio’s plans to transform an uninhabited Caribbean island into a luxury resort.

Conservationists and local fly-fishermen had challenged the Hollywood Star over alleged legal non-compliance of his planned development on Blackadore Caye, an uninhabited 104-acre (42 hectare) island the actor bought in 2005. The island’s surroundings have recently become part of the Hol Chan Marine Reserve and have been used by local fly-fishermen for generations. The sea near Blackadore Caye is home to tarpon, permit, and bonefish – all protected species in Belize.

Last year, the New York Times named DiCaprio’s plans for Blackadore Caye as “his highest-impact leading role yet“ and announced he was “planning to heal an island“ that had suffered from erosion and deforestation in the past. While the Blackadore Caye development plans are consistently being marketed as an “eco-resort“, locals are seeing the Hollywood star’s plans to build up to 40 villas, luxury facilities and related infrastructure on the narrow island with much more critical eyes.

Conservationists are saying the development is far too big for such an environmentally fragile zone. Local fly-fishermen are fearing they will be barred from accessing fishing grounds they and their forefathers have been using for generations. “The construction of so many buildings on a 104-acre island is difficult to justify as ’restoring’ the island to its natural state“, said Dr. Aaron Adams, Director of Science and Conservation for the non-profit Bonefish & Tarpon Trust. But it was mainly the now cancelled construction of overwater resort infrastructure that had enraged local critics.

Defend Blackadore Caye, a citizen’s movement operating a Facebook group with over 1,400 followers, is accusing DiCaprio of turning “a beautiful piece of Belize and its surrounding waters into a playground for the wealthy“.

Alyssa Arceo, spokesperson for the group, said to the Bruno Manser Fund that she welcomed today’s announcement by Blackadore to remove the controversial overwater structures, cautioned however that this promise had been made earlier and later reneged on. “We are going to move forward with a lawsuit against the Government of Belize for approving overwater structures in a marine reserve in order to prevent Blackadore from reincorporating them later“, said Arceo.

Belize’s environmental laws do not allow overwater structures in marine reserves. Despite this, DiCaprio’s resort plans included massive docks, hotel rooms, and a helicopter landing pad over the water. “Such a construction would irreparably damage the island’s marine habitat.“, said Arceo. “At a public consultation, the developers acknowledged that their plans would hurt the environment, but said that it was worth it for them because it was the only way their project was ‚financially viable’.“

Another bone of contention is access to the island and its surrounding waters. Local fishermen are complaining that they have been chased away from Blackadore Caye by armed guards despite their traditioial rights to fish in the area. Belize laws are also stating that seafront property development must be set back at least 66 feet (20 metres) from the shore because the 66-feet are considered public, Queen’s Land. “The Blackadore development team asked for an exception to this law, claiming that the Belizean people placed a ‚security risk’ to the level of clientele they expected for their development. This is simply unacceptable. We demand that Leonardo DiCaprio’s people respect the 66-foot Queen’s Land rule and that fishermen are ensured unfettered access to the water“, said Arceo.

Earlier this year, fierce local resistance had already forced DiCaprio’s development team to scrap a planned airstrip and revise the resort plans after a first Environmental Impact Assessment (EIA) had fallen through in a public consultation last January.

The Bruno Manser Fund calls on Leonardo Di Caprio to respect the free prior informed consent of the affected fishermen and to respect all enviromental laws without exception. “Leonardo DiCaprio’s credibility as an environmentalist is at stake over this development.“

Last week, DiCaprio was forced to announce he’d cooperate with the US Department of Justice and pay back to Malaysia millions of dollars in donations he had received from corrupt individuals. The funds are suspected to have been embezzled from Malaysian sovereign state fund 1MDB. 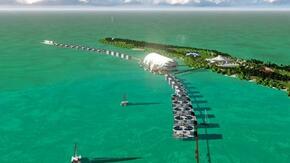