After several weeks of campaigning in Malaysia, Japan, Canada and the United States, BMF executive director Lukas Straumann has got back to his home base in Switzerland. Lukas had been travelling to promote his new book "Money Logging: On the Trail of the Asian Timber Mafia" which exposes significant environmental crimes and the abuse of office by long-term Sarawak Chief Minister and current Governor Abdul Taib Mahmud.

The book promotion tour, which started on 3 November 2014 with a surprise launch in Sarawak's capital, Kuching, led the author to Kuala Lumpur, Yokohama, Tokyo, Ottawa, Vancouver, Berkeley and finally to Washington DC (picture). Author appearances were hosted by NGOs, bookstores and university institutes.

"I am overwhelmed by the positive response my book has found at all public appearances", Lukas Straumann commented. "I was particularly touched by the many Malaysians who expressed their support and said how glad they were that the truth on the Taib regime had finally come out in a book."

The Bruno Manser Fund would like to extend a big thank you to all involved NGOs and organizers who made this tour possible through their personal commitment. The international network against Taib corruption is growing by the hour!

After a break, Lukas will continue the promotion of "Money Logging" early next year in Europe, with an author appearance planned to be held in London on or around 15 January 2015 and further appearances in Basel, Geneva and Brussels.

The situation is particularly tricky in Britain where Taib's London lawyers, Mishcon de Reya, have sent an intimidating legal letter to Amazon, threatening to invoke the UK's rigid anti-libel-laws against the distributor. Amazon subsequently postponed the UK publishing date to 27 November. 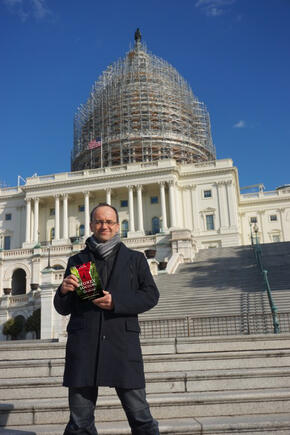