(BASEL, SWITZERLAND) A Swiss Court of Appeal has today rejected a bid for an injunction filed by Sarawak Governor Taib Mahmud’s daughter, Jamilah Taib Murray, and her husband, Sean Murray, against a Swiss NGO, the Bruno Manser Fund, over alleged defamation.

The Malaysian politician’s daughter attempted to provisionally ban 255 publications linking her, her closest family members and her Canadian real estate companies, Sakto Corporation and Sakto Development Corporation, to alleged money-laundering and to grand corruption in the Malaysian state of Sarawak.

The court stated Jamilah Taib Murray had filed her case far too late, nine years after her immense wealth was first publicly connected by the defendants to wrongdoing by the Taib regime in Sarawak.

In its 51-page ruling, the court noted that, for nine years, the Malaysian-Canadian entrepreneur had not a single time reacted to the Bruno Manser Fund’s public allegations, even when a protest rally calling for Taib family assets to be frozen was held in front of her private residence in Ottawa’s Rockcliffe Park district.

The Basel Court of Appeal confirmed an earlier ruling by the Civil Court in which the plaintiffs were ordered to pay USD 165,000 in damages to the Bruno Manser Fund. The latest loss will cost Jamilah Taib another USD 13,000 in damages and USD 10,000 in court costs.

“We are delighted about this extremely clear and favourable judgement“, said Lukas Straumann, the executive director of the Bruno Manser Fund. “Instead of suing a NGO that is telling the truth, the Taib family should finally disclose the origin of its unexplained wealth.“ 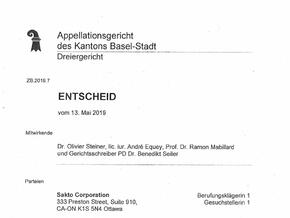