Lukas Straumann meets up with students in British Columbia

Students and Professors at the University of British Columbia (UBC) in Vancouver, Canada, have today learned about corruption under the Taib regime in the Malaysian state of Sarawak. During an event hosted jointly by the UBC's Graduate School of Journalism and its Forest Sciences Centre, BMF director Lukas Straumann presented his new book Money Logging: On the Trail of the Asian Timber Mafia. Introductions were given by Professors Janette Bulkan, David Rummel and by Mutang Urud, a Kelabit campaigner from Sarawak.

Lukas Straumann told the attendees how his Swiss publisher, Bergli Books, and Amazon had been urged by the Sarawak Governor's London lawyer, Mishcon de Reya, to stop the distribution of the book for alleged defamation. He underlined that these were empty threats which were not followed up by legal action from Taib's lawyers.

"Taib Mahmud knows that the facts as exposed in my book are true and will not dare to go to court. Suing me or my publisher would mean for him to open a can of worms as much more misdeeds would come out into the public. We do have the evidence and numerous witnesses on our side. I challenge Taib Mahmud to publicly acknowledge the allegations in my book or sue me."

Lukas Straumann encouraged the students to investigate hard but to keep their reports strictly fact-based. Apart from first-hand witness statements, public records were also an important source of information for his book.

After the event, Straumann met up with Canadian campaigners to reinforce the Bruno Manser Fund's international ties. The Money Logging North America tour will continue next week with author appearances in Berkeley and Washington DC. 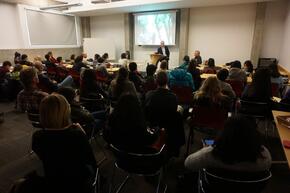