Author not cowed by Taib’s threats

KUCHING: Swiss author and human rights campaigner Lukas Straumann who released his book, “Money Logging: On the Trail of the Asian Timber Mafia”, in the Sarawak capital on Wednesday will not retract even a word of what he has written.“The book has been meticulously researched and is strictly fact-based,” said Straumann on his book which exposes corruption and challenges Sarawak Governor Abdul Taib Mahmud, the predecessor and ex-brother in law of Sarawak Chief Minister Adenan Satem.

Straumann, who is also Bruno Manser Fund Director, was responding to threats by Taib’s lawyers in London.

“Bergli Books have assured the Bruno Manser Fund that the book will be on the market as agreed upon,” added Straumann. “Amazon has not reacted to the letter (from Taib’s lawyers) and is still offering the book for sale.”

The international book launch in Yokohama, Japan, planned for Monday 3 Nov, on the occasion of the 50th session of the International Tropical Timber Organisation, assured Straumann, “will go ahead as scheduled”.

Straumann’s book was jointly launched in Kuching together with another book, “The Peaceful People: The Penan and their fight for the forest,” written by Australian journalist Paul Malone.

The letter dated October 23 from Taib’s lawyers, Mishcon de Reya, warns Amazon UK with a c.c. to Bergli Books, to provide an undertaking by 5pm October 30 not to distribute the book, failing which “our client’s rights against you are expressly reserved”.

The letter warns that the book is highly defamatory and argues that Taib is entitled to bring proceedings against all parties including Amazon for its publication.

Such proceedings, according to the letter, will include claims for immeasurable damages, injunctive relief and costs. “Given the wealth of our client and the extreme seriousness of the allegations, the losses will be substantial,” states the letter in a penultimate paragraph.

The letter laments that Bergli Books, the publisher, failed to respond to an earlier letter by the stipulated deadline of October 17 and further failed to provide the lawyers with a copy of the book as requested. The lawyers then assumed that “the publisher has taken the misguided decision to continue with its plan to publish the book”.

Briefly, the letter takes the position that from the extract available on the preview website, www.moneylogging.org, that the book is based on an entirely false and highly damaging premise.

The letter notes that the six-page extract alone accuses Taib of being a despot, having committed crimes, earning billions of dollars illegally from the timber trade, hiding that fortune abroad through sham companies, committing one of the greatest environmental crimes in history, being a corrupt autocrat, breaching international laws and regulations, using his profit from logging to feed corruption, and finally, having liquidated a forest in order to keep himself, sat at the helm of a state.

“It’s a fair assumption that the book in its entirety will continue in this defamatory vein,” notes the letter.

“This is particularly so given that the website promoting the book states that: “Straumann singles out Abdul Taib Mahmud, current Governor of the Malaysian state of Sarawak, as the kingpin of the Asian timber mafia, while he shows that Taib’s family – with the complicity of global financial institutions – have profited to the tune of US15 billion.” 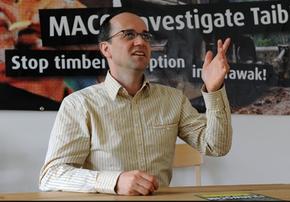