Books on Penan, logging for Adenan

KUCHING: Two visiting writers from Australia and Switzerland are in the Sarawak capital in the hope that they can call on Chief Minister Adenan Satem and present him with copies of their books to persuade a change in government policies towards the Penan, on timber and the environment as well as see the necessity for good governance.Australian journalist Paul Malone wrote, “The Peaceful People: The Penan and their fight for the forest”

Swiss author and human rights campaigner Lukas Straumann wrote, “Money Logging: On the Trail of the Asian Timber Mafia”, which exposed the corruption and challenges of Adenan’s predecessor and ex-brother in law and current governor of Sarawak, Abdul Taib Mahmud.

The books were presented in Kuching on Wednesday in a joint launch attended by two Penan representatives and PKR Sarawak vice chairman See Chee How.

“Money Logging” is about how a single man grew so powerful that he not only dominated a state the size of England over three decades but also controlled its economy.

“‘Money Logging’ is a wake-up call to the international community to treat the Taib family as what they are: politically-linked criminals, who have stolen vast assets from the people of Sarawak in a carefully planned effort,” said Straumann. “Taib abused his public office in a spectacular way to enrich himself, his four children and his siblings. In 2010 he said at a public event that he had ‘more money than I can ever spend during my lifetime’.”

The Taib family has stakes in over 400 companies in 25 countries, added Straumann. “Their known stakes in 14 Malaysian companies alone are worth US$1.2 billion.”

Malone asked Adenan in a brief speech to grant the Penan rights over their traditional lands.

The Penan have an unrivalled claim to land in Sarawak, he pleaded, and as far as the records go, Penan presence in the forests from the Niah/Suai coasts to the upper Rajang and Baram rivers region has been recorded.

“I would like my book to make a contribution to the case for the recognition of the land rights of the Penan. This is essential for justice in this state,” said Malone. “There’s no recognised Penan land title. This is an injustice which must be redressed. Land title for the indigenous tribal people is a basic right, now recognised across the world from Canada to Australia to India.”

The Penan, warned Malone, were persistent in their battle for their forests.

“Their views are not dictated or manipulated by outsiders as claimed by the Sarawak Government. They had mounted protests against logging long before Swiss activist Bruno Manser ever arrived in this country,” he said. “Their peaceful nature is shown in the records I have documented in the book.”

Malone stressed that the Penan had remained peaceful even when their women and children were massacred by outsiders and excessive force was used against them when they embarked on anti-logging and anti-dam protests. 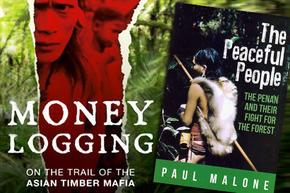