Greed and Resistance in Sarawak's Rainforest

Sarawak, the Malaysian province on the island of Borneo, has long been one of the six world regions with the highest biodiversity. An average hectare of Sarawak rainforest contains more tree species than all of Europe. The local Penan communities have names for more than 1300 of the plants they live with. The forest is also home to orang utans and tree leopards, hundreds of bird species, and frogs that can glide up to 20 meters through the air.

The greed and corruption of a small clique are now turning Sarawak’s rainforests into a monoculture of oil palms and hydropower reservoirs. In a gripping new book, Lukas Straumann, the Executive Director of the Bruno Manser Fund, documents the local politics, international complicity and desperate resistance in the struggle over one of the world’s last paradises.

At the heart of Sarawak’s deforestation sits one man: Abdul Taib Mahmud, the politician who has ruled the island province for more than 50 years as a minister, chief minister, and now governor. Starting in the 1960s, Taib handed out valuable logging concessions to his friends and family without any checks and balances. Within his first six years in power, the powerful politician handed out concessions for an area almost the size of Belgium to his family members and associates.

The bribes which changed hands for the concessions allowed Taib to invest in a business empire at home and abroad, engage in a lavish lifestyle, and pay for generous election hand-outs. In his book, Money Logging, Lukas Straumann estimates the fortune of the Taib family at $15 billion. The family empire includes industrial and banking conglomerates in Sarawak, a stake in 400 businesses overseas, and iconic properties in San Francisco and Seattle.

Cutting down rainforest is not a sustainable business model, and the loggers of Sarawak soon lost patience with slow-growing secondary forests. Since the 1990s, they have increasingly turned deforested areas into oil palm plantations – vast monocultures that were completely devoid of any other trees or animals. By 2005, oil palm plantations covered 42,000 square kilometers in Malaysia – more than the land area of Switzerland.

The latest scheme to turn Sarawak’s ecosystems into quick profits is the SCORE project, a series of twelve hydropower dams, of which the Bakun and the Murum dams have already been built. If the scheme is completed, the dams will inundate 1,600 square kilometers of rainforest and displace 235 indigenous communities with 30,000-50,000 people. They will have a capacity of 7,000 megawatts, even though the electricity demand in the province was less than 1000 megawatts in 2008.

Again, the Taib family profited at every turn. A breath-taking video by Global Witness documents how timber and palm oil contracts oil the politician’s own palms. Taib companies also supply cement and cables for hydropower stations, build resettlement camps, and own the conference center in which the International Hydropower Association held its 2013 world congress.

After 50 years of deforestation, only 11% of Sarawak’s rainforest remain. Indigenous peoples, who have lived with the forest for at least 40,000 years, have been recklessly pushed aside, robbed of their communal forests, and moved into resettlement camps for the dam projects. “Many of the people of Sarawak are as poor as they were when I was born’” says Mutang Urud, an indigenous activist. “And yet, the value of the trees that have been felled is estimated to exceed $50 billion.”

The indigenous communities did not stand by while their ancestral territories were destroyed. Starting in 1987, courageous activists like Mutang Urud and the human rights lawyer Harrison Ngau organized protests and built blockades on logging roads. Bruno Manser, who had lived with the Penan for many years, raised international attention for the showdown in Sarawak through hunger strikes and other actions. Working with the NGO he founded, communities have mapped their ancestral lands and won the recognition of their land rights in important court cases.

Since 2011, SAVE Rivers has brought the affected communities together in fighting the dam projects of the SCORE scheme. Since October 2013, the group’s activists have blocked the construction of the Baram Dam, which would inundate 388 square kilometers of mostly indigenous lands and displace 20,000 people. Their struggle is supported by the Bruno Manser Fund, International Rivers, and the Borneo Project.

Lukas Straumann’s new book uncovers the inner workings of Sarawak’s timber mafia and its international allies. It reports on cronies and on whistleblowers, and most importantly, gives voice to the courageous indigenous resistance. Money Logging fascinates and enrages at the same time.

Peter Bosshard is the Policy Director of International Rivers. He tweets at @PeterBosshard. 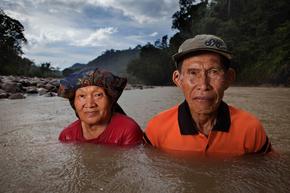