MIRI: The Sarawak People’s Movement or Gerakan Anak Sarawak (GASAK) wants the authorities concerned to probe the contents of a recently released book, Money Logging: On the Trail of the Asian Timber Mafia, by Swiss author and human rights campaigner Lukas Straumann.The author, who also heads the Swiss-based Bruno Manser Fund as Director, claims in his 300-page book that Sarawak Governor Abdul Taib Mahmud, his four children and his siblings have stakes in 333 companies in Malaysia and in another 418 spread around the globe.

The NGO believes the contents of the book smacks of “alleged corruption and abuse of power on the part of Taib during his tenure as Sarawak Chief Minister and Minister for Resource Planning and Management”.

“Until today, Taib has not issued a formal denial or instituted legal proceedings against the book’s author Dr. Lukas Straumann or its publishers which lends credence to our belief that Taib was trying to hide something from the public,” said GASAK spokesperson Romould Siew who stopped short of calling on Taib to step down as Governor and clear his name.

He was making a statement after leading 12 other members of his NGO to lodge reports on Tues at the Miri branch office of the Malaysian Anti-Corruption Commission (MACC) and the Miri Central Police Station.

The reports call upon the police and the MACC to act immediately on the allegations in, Money Logging, as it involves not only the reputation of the present Governor but also the governments of Sarawak and Malaysia.

“It has always been an open secret that Taib and his family members enriched themselves through Sarawak’s lucrative logging industry when he was in power,” said Siew.

“However, it was very difficult to find concrete evidence to link him and his family members on corruption and abuse of power allegations.”

Following the release of the detailed and meticulously researched book, Money Logging, Siew stressed that “the authorities have no excuses that there was no evidence to persecute Taib”. 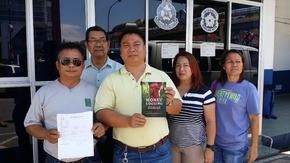