BASEL, Switzerland, November 3, 2014 (ENS) – Swiss publisher Bergli Books announced today that, as planned, it will publish Lukas Straumann’s book, “Money Logging: On the Trail of the Asian Timber Mafia,” despite demands to withhold publication by a law firm representing the billionaire governor of the Malaysian state of Sarawak, Abdul Taib, whose activities are detailed in the book.Money Logging investigates what former UK Prime Minister Gordon Brown has called “probably the biggest environmental crime of our times” – the massive destruction of the Borneo rainforest by Malaysian loggers.

The book was first published in 2014 in German by Salis Verlag, Zurich. It was released in English today by Bergli Books, an imprint of Schwabe AG. Schwabe Verlag is the world’s oldest publishing house, in Basel, Switzerland since 1488.

In a letter to Bergli Books, London law firm Mischcon de Reya claimed that the book, “will cause colossal and irreversible harm to our client’s reputation.”

The firm said its client was Abdul Taib, governor of the Malaysian state of Sarawak, whose family’s fortune is estimated at US$15 billion.

According to the letter from Mischcon de Reya, Money Logging “accuses our client of being a ‘despot;’ having committed crimes; earning billions of dollars illegally from the timber trade; hiding that fortune abroad through sham companies; committing ‘one of the greatest environmental crimes in history'; being a ‘corrupt autocrat;’ breaching international laws and regulations; using his profit from logging to feed corruption; and finally, having ‘liquidated a forest in order to keep himself at the helm of a state.”

In a similar letter to online distributor Amazon UK, Mischcon de Reya demands that Amazon “not distribute the book.” Amazon has not reacted to the Mischcon de Reya demand letter and is still offering the book for sale.Last week, Straumann, who serves as executive director of the nonprofit Bruno Manser Fund in Basel, Switzerland, spoke to journalists in Kuching and Kuala Lumpur, Malaysia after traveling to some of the remaining virgin forest in Sarawak.Straumann states that he will not retract a single word as the book has been “meticulously researched and is strictly fact-based.”

The book’s official launch today in Yokohama, Japan will continue as planned on the occasion of the 50th session of the International Tropical Timber Organisation.

Nevertheless, Straumann was locked out of today’s ITTO opening ceremony and was denied permission to speak at the ITTO session itself.

Despite a timely registration for observer status in mid-October, Malaysia’s delegation to the International Tropical Timber Organisation, ITTO, has orders “from the highest levels of government in Kuala Lumpur” to stop the presentation of the Straumann book. This was confirmed Sunday night to the Bruno Manser Fund by Rob Busink, the current ITTO chairman, Straumann said.The Bruno Manser Fund was locked out of the opening session because of its plan to display the book in the foyer of the conference.

The situation is even more sensitive as ITTO is about to elect its new executive director next week. One of the candidates is the Malaysian timber industry’s chief lobbyist in Europe.

Journalists can receive an e-galley of Money Logging from Netgalley.com or request a hard copy from the publisher.

Meanwhile, in Sarawak, while indigenous peoples are celebrating the one-year anniversary of their peaceful blockades against the proposed Baram Dam, the government last week sent a “troublemaker” and the police to eliminate the resistance, representatives of nongovernmental organizations report.

The Sarawak government and dam builder Sarawak Energy sent a man called Lah Anyi from the local village of Long Kesseh to one of the barricades erected against the proposed Baram Dam.

Lah Anyi claims to have a concession for logging in the Baram area, although this is no longer true. Despite his claim being invalid, 50 policemen from the General Operation Force, which is experienced in dismantling blockades, and also representatives of the Forestry Department helped him to dismantle a barricade at the proposed dam site last Tuesday.

The indigenous protesters immediately set up a new barricade. The protesters have now mobilized more people from all over Baram to help defend the blockades.

Peter Kallang, chairman of the indigenous grassroots movement SAVE Rivers, explained, “Lah Anyi and his family held a concession for logging in the Baram Area in the early nineties. He later joined the Autorich company, which today holds the concession for logging in the area that will be affected by the proposed dam. Lah Anyi, however, went bankrupt and is no longer working for Autorich or its subsidiary MM Golden. His claim to hold the rights to log the area is unfounded. We have reported him to the local police.”

The indigenous activists are celebrating one year of their successful blockade with cultural festivities and are debating how to proceed.

Kallang says that for them to have manned two blockade camps and several barricades for a year constitutes an immense achievement. The activists have repeatedly chased out workers wanting to conduct studies for the dam or carry out construction work on the access road. Work on the site has come to a complete standstill. 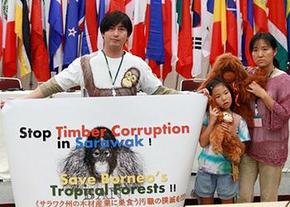