PETALING JAYA: The controversial Bruno Manser Fund (BMF) has long been one of the most vocal environmental groups that have been fighting against the destruction of Sarawak’s rainforest and its next move is unlikely to change that.

It took executive director Dr. Lukas Straumann two years to write his book, Money Logging: On the trail of the Asian Timber Mafia. In it he makes a number of allegations against one of Sarawak's most prominent personalities, a former Sarawak chief minister.

Straumann, who is a historian by training, said that the research for the book started in 2010 but the book itself draws on his experience as BMF director for 10 years.

“Most information is from public records, such as company registries in Malaysia, Canada, the United States of America, Australia, Hong Kong and the United Kingdom.

“But I have also conducted a large number of interviews with indigenous representatives, lawyers, NGO campaigners, politicians and business people,” Straumann told The Star Online.

Straumann said that most of the information in the book has already been provided to relevant authorities, but the book would give the readers a better understanding of what has been happening and continues to happen in Sarawak.

“ I hope the book will raise sufficient international interest to change the way the international community is dealing with Sarawak."

“Everything in the book has been meticulously researched and is solidly sourced, so I am not worried," he said, when asked if he was afraid of any legal repercussions when the book is published.

The book is due to be published in Nov, and the author said that the distributors were already seeing a lot of interest from Malaysian readers.

“I wouldn't be surprised if there was an attempt to stop its distribution in Malaysia. But in the age of ebooks, it's virtually impossible to prevent the message from being spread,” he said.

A sneak peak of the book, as well as information on the author and BMF is available at http://www.money-logging.org/ 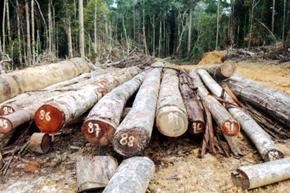