Book on Taib's 'environs crimes' to be out soon

‘Money Logging: On the Trail of the Asian Timber Mafia’, written by BMF executive director Lukas Straumann, is to be launched at the 50th session of the International Tropical Timber Council in Yokohama.

The book claims it will “rock Malaysia’s corridors of power” with the exposure of Taib, who has been described by BMF as “the kingpin of this Asian timber mafia”.

“Straumann goes in search, not only of the lost forests and the people but also the network of criminals who have earned billions through illegal timber sales and corruption,” BMF says of the book on its website.

The book is also said to incriminate the family of the Taib - who was Sarawak chief minister for 33 years until he stepped down this year to become Sarawak governor - of allegedly profiting around US$15 billion (RM48 billion), with the complicity of global financial institutions from the timber trade.

BMF added that the book aims to investigate what former British Prime Minister Gordon Brown has called "probably the biggest environmental crime of our times".

“Money Logging is a story of a people who have lost their ancient paradise to a wasteland of oil palm plantations, pollution, and corruption - and how they hope to take it back.”

In his testimony, Abu Bekir denied his ex-wife's claims that his father was the richest person in Malaysia. 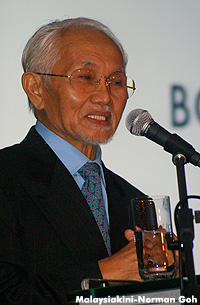