BOOK REVIEW Money Loggingby Lukas Straumann, the Director of Bruno Manser Fund in Switzerland, appears to be another fiction hot from the mill, until you begin to realize that the characters mentioned are real people.For over 12 years, Ross Boyert – “the man who held the key to Sarawak Governor Abdul Taib Mahmud’s secret real estate empire” – managed his family’s properties in northwest USA as CEO of Sakti International Corporation.

A conscientious manager, who helped the Taib family make huge profits from their properties, Boyert found himself at odds with the Canadian son-in-law of Taib, Sean Murray, who was a director of Sakto Corporation in Canada. Like Sakti International, the company also belonged to the Taib family.

This time, Taib had appointed Murray to take over the management of Sakti International.

Boyert, of course, did not believe this.

He wrote “a long letter to the chief minister at the end of 2006, to which he appended two hundred pages of documentary evidence of all he had done for Sakti.”

When Taib did not respond, Boyert decided to file a suit with the Supreme Court of California in San Francisco against the Taib family, citing breach of contract, fraud and infringement of labour law.

“With his statement, he included a detailed description of the properties owned in the USA by the Taibs, and the disguising of that ownership through offshore companies in the Caribbean and the Channel Islands,” wrote Straumann.

This is how Taib’s secret real estate empire became known to the public.

At the same time, this was also the beginning of ‘martyrdom’ for Boyert and his family. “After we filed the suit, our house was broken into several times, our car was vandalized, we received death threats, and we were constantly shadowed. But I regret nothing. I simply had to file that complaint for the sake of justice, and I am determined to fight against Taib to the very end,” Boyert was quoted saying.

Revealing a secretly recorded conversation between Sarawak Report Editor Clare Brown-Rewcastle and Straumann with Boyert, Straumann quoted Boyert: “Taib owns properties worth US$ 80 million in San Francisco and Seattle, and I administered them for twelve years on behalf of his son, Sulaiman.

“Sakti International Corporation, Wallysons Inc., and W.A. Boyslton are companies owned by the Taib family, with properties on the west coast of the USA. The companies are registered in the names of Taib’s children and his brothers and sisters, but in reality they belong to him in person. Here’s proof.”

Quoting Boyert, Straumann revealed that the Abraham Lincoln Building in Seattle, which is currently leased to the FBI, was purchased for US$ 17 million when Sulaiman Taib was still a student.

“It is unthinkable that the FBI did not know that its new Seattle headquarters belonged to the family of a corrupt Malaysian politician,” Straumann wrote.

“There is no evidence, however, that this was a source of concern for any of the senior FBI personnel, although the Seattle FBI boasts on its website that one of its priorities is to ‘combat public corruption at all levels’.”

Four months later, on 3 Oct, 2010 Boyert was found dead in his hotel room in Los Angeles.

According to Straumann, “Ross had pulled a plastic bag over his head, taped it tight around his neck and suffocated. He had killed himself.”

Straumann has detailed in Money Logging, his latest book, what Suddeutsche Zeitung describes as “one of the most comprehensive and brutally honest investigations into the intrigues of the Malaysian and international timber mafia.”

According to the Bruno Manser Fund, Taib’s wealth “is estimated to be worth a total of 15 billion US dollars, making him one of the richest and most powerful men in South East Asia.”

Many of Taib’s secrets have been exposed by Clare Rewcastle, in her portal, Sarawak Report. Clare is a former BBC journalist and a sister-in-law of former British premier, Gordon Brown. (http://www.sarawakreport.org/).

Straumann was in Kuala Lumpur to personally launch his book on Fri Oct 31. 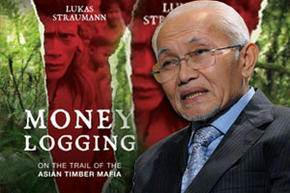