The book, titled “Money Logging: On the Trail of the Asian Timber Mafia”, was unveiled in Kuching at a joint launch with Australian journalist Paul Malone who presented his book, "The Peaceful People: The Penan and their Fight for the Forest".

The launch was witnessed by Sarawak PKR deputy chairman See Chee How.

“The book is about corruption happening at the highest level of government,” Straumann said at the launch.In the book, he stated that American economist David Walter Brown had estimated that between 1970 and 1999, over US$25 billion (about RM82 billion) in timber revenue was unofficially appropriated by timber concessionaires, heads of states, their proxies and clients in Sarawak and Sabah.

Straumann said at the launch that he took about four years researching for the book and still his expose was “only scratching the surface” of Taib's alleged misdeeds.

“I am only scratching the surface because I could only publish what I know and what I can prove.

“From what I heard from insiders (people working for Taib or his family) there are many nominees being used and nominees are hard to trace,” he said.

His big break came in 2010 when the American accountant of Taib's younger son, Datuk Seri Sulaiman Abdul Rahman Abdul Taib, contacted investigative journalist Clare Rewcastle “with sensitive information" and said he was ready to share it.

Rewcastle is behind the blog, Sarawak Report, which highlights corrupt practices in the state and aims to provide an alternative vision of justice, transparency and a fairer future in Sarawak.

Straumann then was already working with Rewcastle, a former BBC journalist, “to expose the crimes of Taib and his entourage”.

He said the accountant, Ross Boyert, provided them with documents linking Taib and his family to multi-million dollar properties in the US.

Four months after his meeting with Boyert in Los Angeles, Straumann said the American was dead.

He had killed himself.

“I hope the book will have an impact (with the people of Sarawak) because I believe in the power of written words and the power of history,” he said.

“Maybe it could trigger some more research and encourage people to come out and say, 'Yes what we see here is unjust, unfair and it shouldn't go on'."

The book, sold at RM105 a copy, is only available from November 3 by mail order.

Straumann had initially planned to launch his 300-page paperback on November 3 in Japan on the occasion of the 50th session of the International Tropical Timber Council (ITTC) in the city of Yokohama.

Straumann, who is also the executive director of the Swiss forest conservancy group the Bruno Manser Fund, will also be presenting his book in Ottawa and Vancouver in Canada, San Francisco and Washington DC in the United States, London, Brussels in Belgium, and Basel and Geneva in his home country.

He said the cities were where Taib, who is now Sarawak's Yang DiPertua Negeri, and his family had reinvested their alleged illicit proceeds from the state's timber trade. – October 30, 2014. 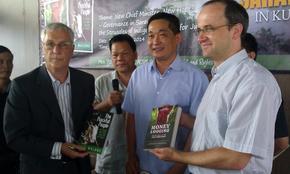