Sarawak governor Abdul Taib Mahmud's lawyer has issued a letter to publishers and distributors of a book on corruption in the logging industry in Sarawak.

In a letter to UK book distributor Amazon, lawyer Mischon de Reya said this is as the book 'Money Logging: On the Trail of the Asian Timber Mafia' is "based n an entirely false and highly damaging premise".

He said that if "highly defamatory" book is distributed, Taib will take legal action against all involved in the publication.

"Given the wealth of our client and the extreme seriousness of the allegations, the losses will be substantial."

According to De Reya, the book wrongly-describes Taib as a "despot" and implicated the former CM in a death.

"Clearly, a book which leaves readers believing that our client is a criminal, corrupt, responsble for natuural disasters worse than devastating oil spills and akin to genocide, and worse than a middle eastern dictator, is damaging to the highest degree," he said.

A copy of the letter to Amazon, marked "strictly private and confidential" was distributed to media by Swiss-based NGO Bruno Manser Fonds, which is led by the book's author Lukas Straumann.

In response, BMF said both Bergli Books and Amazon have not reacted to the letters.

"Bergli Books have assured the Bruno Manser Fund that the book will be on the market as agreed upon. Amazon have not reacted to the letter and are still offering the book for sale," it said.

BMF said the international book launch in Yokohama, Japan this Monday in conjunctio with the International Tropical Timber Organisation's 50th session will go on as planned.

It added that Strauman stands by his work.

"He will not retract a single word as the book has been meticolously researched and is strictly fact-based," he said. 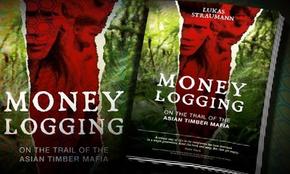